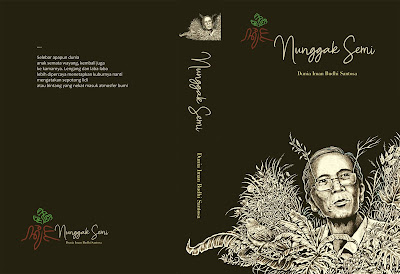 Iman Budhi Santosa, an Indonesian poet published by Flying Island in 2015, passed away in December 2020. He had dedicated his life to mentor countless creative writers and poets in Yogyakarta, Indonesia since 1969. Iman is known as one of the street poets in Yogyakarta, actively writing poems and plays even in the three-year period when he was homeless and lived in the streets. His poems, both in Indonesian and Javanese, generally revolves around Javanese culture and urban life.
To commemorate his contribution, a book called Iman Budhi Santosa: Sebuah Obituari will be published and launched in March 2021.

I cowered next to you

no need for an introduction

you ran out of relatives

while I was still looking for an address

in the open field

Chrysogonus Siddha Malilang was a nomad writer and translator before finally settling in in Southern Sweden. He started writing professionally – as a journalist – at an early age of 12, mainly motivated by an innocent wish of seeing his name printed in newspaper. After writing a number of short stories for various newspapers, he published two novels in 2006.

In 2013, he got involved with Flying Islands and started translating Iman Budhi Santosa’s poems (Faces of Java) into English. He was then granted Indonesian government funding for a poetry translation project in 2015. His own collection of bilingual poems, Encounters: Never Random, was published in 2017 by Flying Islands.

He is currently teaching Creative Writing in Malmö University, Sweden and at the same time trying to get back to a poet mode. His latest works, translations of three children’s books from Danish to Indonesian, are coming in March 2021.

old fortress
under moon that blooms

husky contralto
belting the ballad out

from her throat
deep the waves

in which we swim
ears least perhaps

this is rhythm
all in the chest

where memory
is found

because of the words
all out of language

because as the singer says
this is heart’s translation