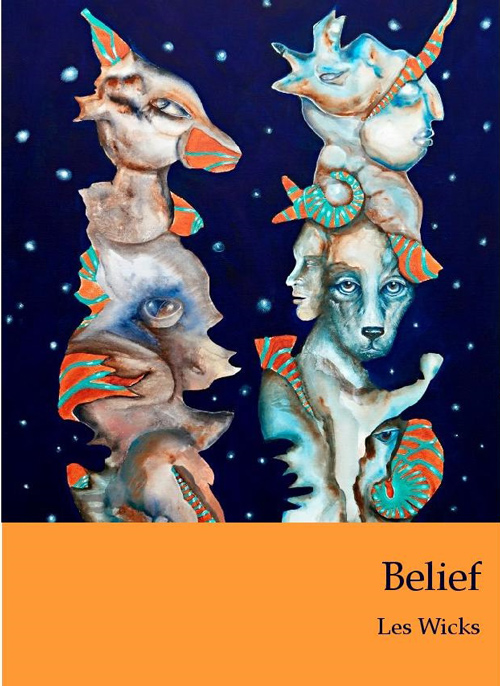 as though we had conquered something real.

There were enough stories that day,

our backs bent, the calcium dust we shed as we struggle on towards dotage.

There’s a form of war universally fought against the years.

Staunch, she faces this foe that always defeats

but that’s not the point.

Then think back her ex-lover Janet

that careless brilliance the photographs, poems

I think about the “fallen”,

those casualties to narrative,

the ones who shone with promise flared a few years

Flying islands have done such a great job, around 80
titles. Such fabulousness!

Mine came out in 2019 (remember that virus free time?)

Looking forward to reading the other entries!

Les Wicks’ 14th book of poetry is Belief (Flying Islands, 2019). For 45 years Les has been active in the Australian literary community.  He has been a guest at a substantial list of international festivals.

Publication has been seen in over 350 different newspapers, anthologies and magazines across 32 countries in 15 languages.

Equally well known is his work as a publisher and editor. Australia saw Artransit which put poetry/art into Sydney and Newcastle buses but that is just one of dozens of similar roles: some predictable like literary magazines while others range as far afield as publishing a poem on the surface of a river. The most recent publication is To End All Wars (Puncher & Wattmann, Nov 2018).