‘…Knitting Mangrove Roots is a fitting title for the work. The mangrove with its tangled roots that grow above ground forms a dense thicket. Its root system maintains water quality and clarity, filtering pollutants and trapping sediments originating from the land. The three sections of the work – The roots, The ground and The tide – recall the life cycle of the mangrove tree and its connective and protective importance to the environment.

It is a vital part of our ecological system in the same way the voice of the poet is a positive strength in the world: as nurturer and protector.’ 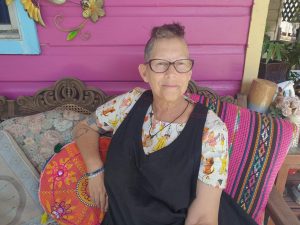 Kerri Shying is a poet of Chinese and Wiradjuri family who received the NSW Writers’ Centre Emerging Writer Grant in 2017. Kerri’s poems have appeared in Snap Journal, Cordite, Verity La, Ear to Earth, and Women of Words, 2016. She is the author of a bilingual pocketbook of poems sing out when you want me, published in 2017 by Flying Islands/ASM/Cerberus Press. Kerri was shortlisted in the Helen Anne Bell and the Noel Rowe Prizes in 2017 and is the recipient of the Varuna Dr Eric Dark Flagship Fellowship for 2019 for her collection Know Your Country. Kerri’s chapbook Elevensies (in the Slow Loris series) was published by Puncher & Wattmann in 2018.

The elevensies form was invented spontaneously in conversation between Kerri and Kit Kelen, who noticed that this was how things were tending for her, and that an eleven liner could become a respectable form in its own right: a form any poet might attempt. Five lines either side and the middle line’s the title, that’s all there is to it.