Decline and Fall is a small scale book containing a number of ambitious and important recent poems side by side with a series of Chinese translations by Song Zijiang and Hilda Tam Hio Man. The poet worked for a weekend with the two translators face to face, however the collaboration was for a considerable period during which Song and Hilda worked with great care to catch the individual quality of Jones’ work. That they have succeeded is remarkable because of the gulf between the conventions of vernacular Australian English and Chinese.

Rae Desmond Jones was born in the mining town of Broken Hill, in western New South Wales. He migrated to 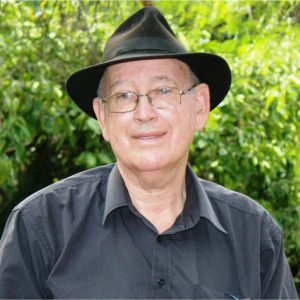 Sydney at the age of 17, but maintained contact with his origins. He published four books of poetry through the 1970s, and several novels in the 1990s. After a career as a community activist and councilor, he became Mayor of inner-western Sydney’s Ashfield Council, retiring in 2007. Several more volumes have appeared since then, leading up to the appearance, in 2013, of his new and selected poems, It Comes from All Directions, published by Grand Parade Poets. Rae passed away in 2017. A last book, The End of the Line, was published by Rochford Press in 2019.