Anyworld is a pocket collection of ten poems that were previously published in various magazines and chapbooks in the first decade of the 21st century. It’s a sample of poems that are a bricolage comprising multiple registers of self-awareness, observation, social critique, literary memory and sudden incisive humour. A kind of layering of meanings describes much of the action in the poems, as the ordinary surfaces of the day radiate messages prismatically, even as they resist symbolism in favor of an embodied materiality in pastiche. These poems provide excellent company for public transport trips, solo café visits and for skiving off from dull lectures.

“…Brown’s sensibility has something in common with that of the theorist of hyperreality [Jean Baudrillard]—though with the interesting difference that mass-media events, along with scientific and technological imagery, hardly figure in her work. What Brown is concerned with are effects on the most transient and miniature level of perception, and the way these accumulate over quotidian time. In this or Anyworld.”

“Reading Sappho or Li Po or Pam Brown you think ‘Yes of course, this is how to write’ and I’ll just move with the same lightness’ and ‘I can loft some glitter-bit into the poem and ‘I can leap like that’ and then you can’t (but you’re still happier for having imagined it).”

Rachel Loden (author of Hotel Imperium and Dick of the Dead)

Since 1971, Pam Brown has published seventeen books, ten chapbooks, and an e-book called The meh of z z z z.  Home by Dark was published by Shearsman Books in 2013.  A bilingual French-English edition of her poems, Alibis, was published 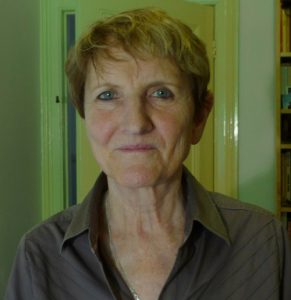 in 2014. She has also written reviews, articles, and for theatre and film. She has been poetry editor for magazines and independent small presses. She has earned a living variously and until 2007 spent sixteen years engaging in the pleasures of classification as an employee in the life sciences library at the University of Sydney. In 2013 Pam Brown held a Distinguished Visitor Award at the University of Auckland, New Zealand. She divides her time between Pinsk, Belarus and Alexandria, Sydney and blogs intermittently at thedeletions.blogspot.com