The Leaving by Brian Purcell

The Leaving features poems mostly written in the past decade, covering the author’s move from the city to the country, new challenges, relationships, landscapes and loves. Poems written with humour and in sorrow, with joy and passion, with incredulity and awe. Sometimes clear-eyed and disturbingly real, sometimes utterly fantastic, containing portraits of painters and politicians, of children paddling canoes, of a doomed lyricist writing songs on the road, of a lover pleading with his girlfriend to stay, and finally of life in the shadow of Covid. Just one person’s life in the 21st century.

Brian Purcell is a poet and painter based in Bellingen on the mid-north coast of NSW. His first poems were published in Poetry and Audience (Leeds, UK) in the early eighties. In 1984-85 he met poets like Kit Kelen and Adam Aitken through publishing poems in Poetry Australia’s young writers’ issue, New Pressings. 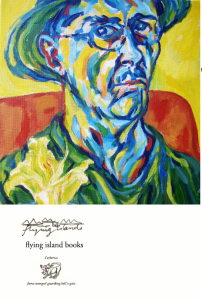 He became involved in community literature, as voluntary secretary then president of the Poets Union Inc, and continued to publish in Australian magazines such as Meanjin, Imago, Hobo, Rant, Scarp and Southerly, and in anthologies such as Australian Love Poems (Inkerman and Blunt).
Brian was the singer/lyricist for the alternative Sydney band Distant Locust (1985-95) with whom he toured Europe in 1991, playing in the Netherlands, Italy and Germany. His only book-length publication, Lovely Infestation, was released in 1995 by the independent label We Make μ-sick, and contains lyrics and collages associated with Distant Locust. That same year saw the band’s last CD release, Fearful Pleasure.
In 2008 he moved to Bellingen and in 2010 founded and coordinated the Bellingen Readers and Writers Festival. In March 2021 he had a one-man show of paintings, The Day on Fire, at the Shop Gallery in Glebe NSW. The Leaving is his first book of poetry.