The Line is Busy by Andrew Burke

‘The Line Is Busy’ is a selection of poems chosen between Andrew and Iris Fan who translated the poems. Some minor hurdles were negotiated between them, under the watchful eye of Kit Kelen. The cover is Blue Abstract by Marjorie Bussey, Australian artist, and the back cover portrait of the poet was by Chiara Bussey, daughter of Marge. The contents are in two languages to further the readership of this Aussie poet – and for the adventure of seeing the poems focused one word at a time. A beautiful book to hold in your hand!

Andrew Burke is an Australian poet who has lived most of his life in Perth. 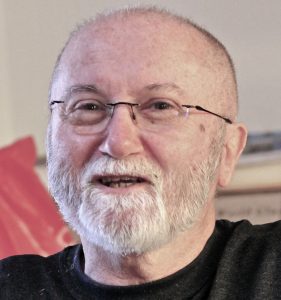 After his birth in Melbourne in 1944, Burke’s family moved west. In his teens, Burke read ‘Beat’ writers, and they gained his interest more than the literature at school. He published his first short story at 18. He has written on a daily basis ever since—stories, plays, poems, and—to feed family—advertising material and videos. From 1990, Burke taught creative writing and allied subjects at tertiary institutions, gaining a PhD at ECU. In 2006, he and his wife Jeanette travelled to China where they taught at Shanxi Normal University, Linfen, and, on their return, they taught indigenous children in The Kimberley area of North West Australia. He now dedicates life fulltime to writing.