The Party of Life by Beth Spencer

In ‘The Party of Life’ Spencer writes about love, family, gender, sexuality, class and belonging with raw honesty and insight. Like any good party, there is much to enjoy and ponder in this witty and evocative collection.

“These are beautiful poems. I got goosebumps while translating some of them. They are all hauntingly beautiful. I remember not being able to move when I came to the last line of ‘the Bra Monologues’. I don’t know why; I was strangely touched.”
— Ruby Chen (translator)

“The Party of Life is a big book disguised as a little book. It is the Tardis of books. …Highly portable, richly evocative, impeccably observed and moving.”
— Bernard Cohen

“As Beckett didn’t say ‘Ever tried. Ever felt. No matter. Try Again. Feel again. Feel better.’ So when, at the start of ‘The Museum of Fire’ she quotes Peter Tyndall ‘A person looks at work of art / Someone looks at something’ it is an ‘aha’ moment that lasts the whole book through because, like Tyndall, Beth’s statement is always true, always the same, and yet infinitely variable.’ – Peter Kenneally 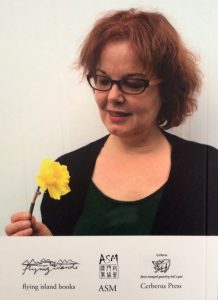 a verse memoir from UWAP, and How to Conceive of a Girl (Vintage/Random House). Her awards include the Age Short Story Award; runner up for the Steele Rudd Award; several fellowships from the Literature Board of the Australia Council; and she was the Inaugural Dinny O’Hearn Fellow. An expanded print version of The Age of Fibs, which won the inaugural Carmel Bird Digital Literary Award, will be published in 2022. She lives and writes on un-ceded Guringai & Darkinjung land on the NSW Central Coast. www.bethspencer.com & @bethspen

Jing Chen, Ruby, was born in Jiangsu province, China. She received her bachelor’s degree in English literature fromWuhan University, and is currently completing an MA degree in translation studies. She has worked as a translator since 2005.

Iris Fan Xing has a PhD from the University of Western Australia on contemporary Australian and Chinese women’s poetry. Her own Chinese-English volume of poetry Lost in the Afternoon was published by ASM in Macao in 2009. Fan won first prize for poetry in the HK City Literary Awards for 2011.