What the river told me by Jane Skelton

Where is home? Where is my place? Would I feel at home in the place of my ancestors, or is my place this invaded, colonised country, where I’ve mostly lived? In these poems, I journey to Scotland, to the moors of Northumberland, seeking a genetic thread. I think I’ve found my people, ‘but it was only the whiskey’. Home again, through rivers, the lake and the sea. The dry bush, Queensland, are washed in images of water. I dig at the roots of colonisation, the blackbirder William Boyd, who left his mark on a coast that I love, a wild, quiet place with a violent history. A centre, a heart-place is identified, only to be devastated by fire and flood, the onslaught of climate change. Virginia Shepherd’s illustrations, her strange primordial fish, are a pause, a counterpoint, a reflection on nature and transience.

Jane Skelton is a Blue Mountains writer of poetry, short stories and novels. Chimera, her chapbook of prose and poetry was recently published by Rochford Press. Lives of the Dead and Other Stories was published in 2013 by Spineless Wonders, and her novella Flying Foxes was short-listed in the Carmel Bird Award and published as an eBook in 2015, also by Spineless Wonders.
Jane Skelton’s poetry and stories have also appeared in literary magazines and anthologies including in Overland, Island Magazine, Going Down Swinging, Hecate and the Margaret River Press collection. Earth Eaters, a novel, was a winner in the Varuna LitLink award in 2010, and extracts 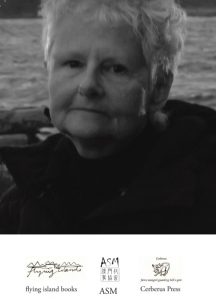 are included in Lives of the Dead.
Actors have given voice to her creative writing at Little Fictions events in Sydney, and in the 2018 Story-Fest.
Jane has a doctorate in Creative Arts and is a casual academic at Western Sydney University. She is a member of the LGBTIQA+ community.
Her website is   janeskelton.com.au